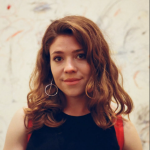 Posted in art, other, words.

Knomia Monika, as her name might suggest, is equal parts Knomia and Monika.

Her given name, Monika, seems to represent her more earthly parts. The part that acknowledges the hardships of parenthood and shows up to meet us at Café Europa a few minutes late, laughing as she explains that she had to take a moment to comb the motherhood-induced tangles out of her hair.

Knomia, a name that befell her at a concert (and an anagram of her given name), seemingly expresses her spiritual part. The meandering gypsy who feels a strong kinship with the Great Mother, who has gone on pilgrimage to the cave of Mary Magdalene at La Sainte-Baume and lived at the base of a mountain, drinking spring water. The part that blissfully delivered her first-born son without medical assistance in a cabin outside of Seattle and meets us wearing a red poncho over a full black skirt that rustles with her measured gait.

Together, these pieces mingle to create a whole artist: a photographer whose art is at once earthly, tangible even, and simultaneously dreamy and otherworldly.

“I just deeply wanted to know the mystery so I kind of abandoned conventional life and I went out on my own,” she says, describing her life’s wanderings which took her all over the U.S. on musical tours, to France on pilgrimage, to Seattle, back to her birth state of Arizona and finally to Denver to raise her two children, Rome and Silver, with their father, Johnny.

“I’m so grateful I went out on my own because now I’m a mom and it’s hard. I have two rascals. They’re crazy. I’m like oh my god, what did I do,” she says, laughing. “It was really cool to just go off and explore these things that live inside of you. Sometimes you don’t even know where they come from or why they’re emerging or why they exist. Following that instinct really just brought me into where I am today.”

Knomia has been taking photographs since she was in high school. She has drawn much of her inspiration from the journey of motherhood, as well as nature, history, spirituality and sisterhood. She received her first 35 mm film camera from her ex-husband and has been hooked ever since.

“I love the magic of developing my film,” she says, fluttering her eyelashes. “Seeing these images emerge from water and darkness and chemicals; it’s all so dreamy and exciting and so unknown. You never know what you’re gonna get when you’re shooting film and with natural light.”

Her first solo show in Denver, ‘Mother,’ was displayed at Ironwood on Broadway from July to September. The show documented her first unexpected pregnancy and the spiritual and bodily transformations that it entailed.

“It was really intimate and tender and beautiful and it really inspired me,” she says. “I was like, I’m going to document this whole entire thing and of course I got really sick for three months. I was thinking that I’d be super blissed out during my pregnancy. I’m with child, it’s so heavenly but part of it I was just nauseous and it wasn’t fun at all.”

Knomia seems to take the good with the bad when it comes to motherhood. Now twenty months out from the birth of her second child Silver, Knomia is ready to phase out being a stay at home mom. She seems to have found a niche as a photographer in Denver and has three upcoming shows in 2015, one at Huckleberry Roasters in January, another at Pablo’s on 6th in February and a third at Café Europain March. Knomia’s excitement about her upcoming shows is apparent, but she seems to be taking life one day at a time.

“I feel like I found out that we’re all just people and we’re all here to find our way,” she says. “It takes strength just to wake up and get out of bed.”

Knomia has honed her own strength over time, finding huge inspiration from mother figures like Mary Magdalene and the Egyptian goddess Isis, among others.

“I really believe in what the feminine has to offer,” she says, her dark hair falling into her eyes for a brief second.

She notices this particularly in photography with the evident difference between the way she conveys herself through photography and the way male photographers depict her.

“Shooting myself is like a completely different and liberating experience than being shot by someone else, men in particular, because a man will shoot you in a way that maybe you didn’t see yourself,” she says. “I love shooting myself because I can shoot myself in the way that I see myself, in a way that’s really deep and intimate and vulnerable.”

Her awareness of the male gaze isn’t necessarily negative, but she believes that women should do their best to support and encourage one another. She sees the idea of the man’s world slipping away to make room for others.

“It’s our time to really shine and come into ourselves and reveal our truths,” she says. “I’m working with women here in a way that’s really exciting just because I see the light shining brighter in them and around them just by the honesty that comes from us with each other.”

Knomia leaves me humming with the improbability of life, aflush with images of fleshly figures bathed in warm light. Monika leaves me content that I dragged my tired ass out of bed and braved another day in a world softened by honest words.